Built by the North London Railway in 1864 as a four compartment, all-first class, 4 wheeled carriage, this vehicle was purchased second hand, over 30 years later by the Isle of Wight Railway (IWR), along with six other carriages. It was numbered 46. It retained the varnished teak livery, but bore the garter motif of the IWR, with its number in the centre. One of the first class compartments was down-graded to second class. When the Southern Railway took over in 1923, these 60 year old carriages were quickly withdrawn and disposed of, still in IWR livery, although it had officially been renumbered to 6336 and the second class compartment would have been down-graded again to third class. Over 50 years later, the body of 6336 was discovered as part of a bungalow at Hayling Island. It was acquired by the Isle of Wight Steam Railway, restored and mounted on a luggage van chassis, and returned to service 11 years later, in the olive green Southern Railway livery it had never previous worn.

So, this carriage is almost completely wrong for my 'Freshwater' layout based in the late 1940's-early 1950's, but Etched Pixels have a 3D printed model of the body, and David Eveleigh produced a 2mmFS etched nickel-silver NLR chassis, so I thought it would make a nice quickie addition for the layout. Well, not as quick as I had hoped, of course.

Here is the 3D printed body as it came, and the chassis under contruction, just three years ago: 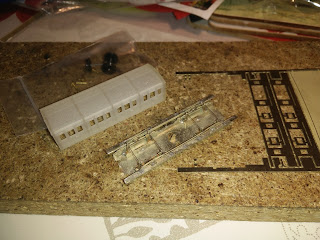 The body received a coat of primer, and the chassis completed, and sprayed black earlier this year. It is seen in company with an ex-LBSCR Stroudley carriage, which I will decribe in a later blog: 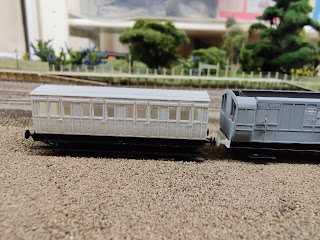 There then followed some rubbing down, painting, addition of Fox transfers (two sheets needed because lots of 6's and 3's are used here). Some glazing and passengers were fitted, and then some gentle weathering. Finally it is ready to take its place in the stock box. 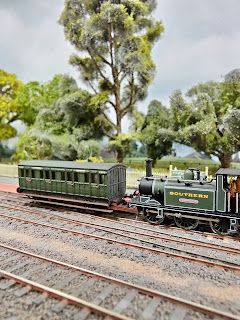 One job that I had been putting off for too long was fitting dummy point rodding. It needed to be done before I could get on with adding details to the front half of the layout, as it would be too difficult to access where it had to go without causing damage. With an invite to the Ally Palley 2020 exhibition, I really wanted to get it done in time for that. I just managed to complete it before receiving confirmation that the event was cancelled. C'est la vie. Anyway, it has given me time to add further details before any rescheduled exhibition, whenever that might be.

On Freshwater, rodding was only required for a crossover pair of points near the buffer stops, a point and linked trap point at the station throat, and the facing point lock (FPL) with fouling bar protecting the point at the station throat. Hardly anything, really. I had two etches of point rodding, and one of cranks and pulleys, available from the 2mm Scale Association. These were acquired before the better looking system of etches and guitar wire, created by Laurie Adams, was launched. However, on reading up the instructions for this new system, it was clear that Laurie's system should really be installed before any ballasting, or scenic work is attempted. It was hard enough adding the simpler system to Freshwater with ballast and the station platform in place.

The etched nickel silver rodding I had comprised two runs of 7 rods, each about 11cm long, with cross joins where the support rollers would be. This can be cut down to narrower runs. For Freshwater, only three rods leave the signal box, and the longest stretch is only two rods, so I had plenty. I chose to use code 40 bullhead rail to form the roller supports. They would not have the detail of the newer system, but being near the far side of the layout, and suitably weathered, the lack of detail will only show in close-up photos. 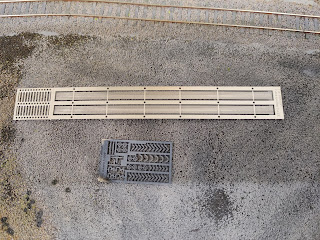 I started by cutting out lengths of triple and double rodding. A length of the code 40 rail was then laid across one of the etched cross joins, the end of the rail lining up with the side edge of the rodding. It was then soldered down, and the rail cut close to the other edge of the rodding with the faithful Xuron cutters. This was repeated, and repeated, and repeated ....

From the signal box, there is a short run of 3 rods across behind the buffer stops to a right angle corner before running along the front of the platform. For the corner, three right angle cranks were soldered to an offcut of etch, with spacer scraps under each crank so they sat at different heights to avoid interfering with each other. This was given a quick spray of grey primer, and glued in place with UV curing glue. This glue was a godsend in this process, as it gave ample chance to adjust the position of items, and hold them in place, but a 4 second blast of the blue light set it firmly in place. I don't think this job would have been possible with either superglue or epoxy resin.

With the cranks in place in the corner, a length of triple rodding was trimmed to length to fit between the signal box and the cranks, and the rods at the end next to the cranks gently bent to match the different levels of the three cranks. The rodding was then positioned, and glued with more UV glue, one support at a time. This was not easy in the cramped space between the buffer stops, platforms faces and signal box, but it was satisfying once done, and proved that it was worth while completing the job. There is also a pulley for a signal wire to a ground signal guarding the crossover, but I am not sure I will find anything small enough to represent the wire. 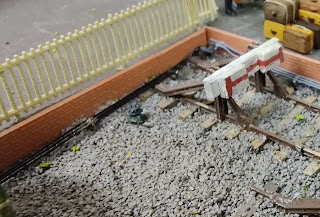 The next run was to the two points for the crossover. This required joining three lengths of rodding, by carefully soldering the ends with a small overlap. One rod connects to both points of the crossover, so a short length of a single rod was soldered underneath one of the triple rods, gently bent down to reach a right angle crank. This should be one of the adjustable cranks. This crank was soldered to another etch offcut to form its base. The third rod was then cut to length for the position of a second adjustable crank further along the platform. This delicate lacework was then glued down, one support at a time, with the UV glue. Short lengths of nickel silver rod were then glued between the cranks and the points, to give the appearance that they connected to tie bars. 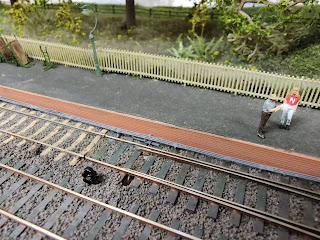 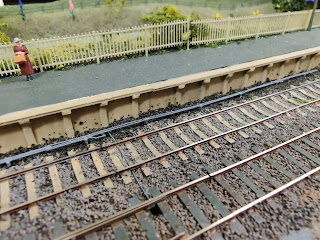 There then followed a long run of twin rods along the platform edge towards the point at the station approach. About halfway, a pair of compensators needed to be fitted. These convert a pull to a push (or vice versa) and automatically take account of expansion and contraction of the rods as the temperature changes. The expansion of one length of rod that is pushing is cancelled out by the expansion of the second length of rod that is pulling. Clever stuff. 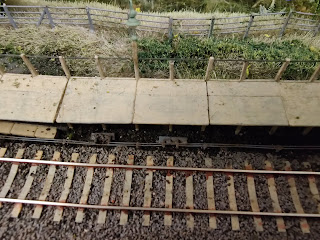 At the far end of the run, one rod is linked to the point and trap point, similar to the crossover, while the remaining rod continues on alone to operate the FPL, with a fouling bar preventing operation of the lock when a vehicle is on it. The rod to the trap point had to have extra cranks as the rod crossing the tracks needed to thread through the point timbers ahead of the trap point blade.

Of course, I ran out of etch with a couple of inches left to complete, and a quick order to the 2mm Scale Association for another etch had to made. 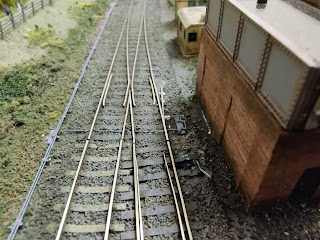 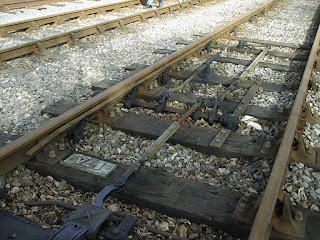 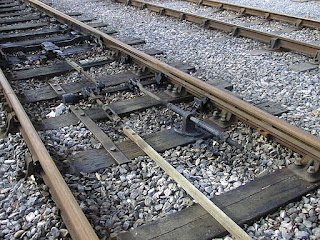 It was formed from odd bits and pieces to roughly resemble the real thing. 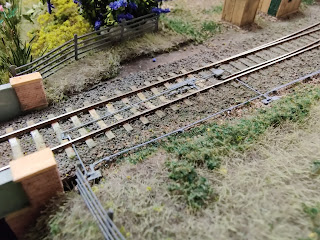 A final touch was adding manual point levers to the rest of the goods yard points. I also read up about how they work in real life, which is fascinating, and again, clever stuff. 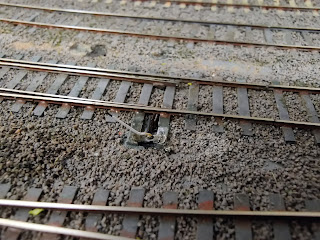 Mostly the rodding is out of the way of the track cleaner. It is just part of the FPL that is slightly above rail level. The manual point levers are a different matter. I place inverted plastic shot glasses over them while I work on the layout, but have demolished and replace two already. 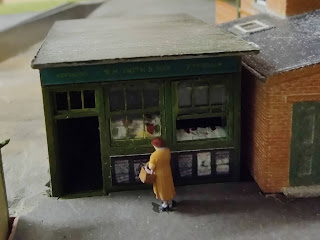 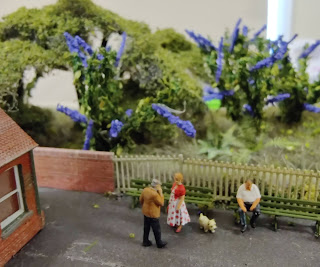 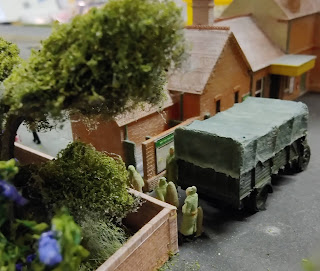 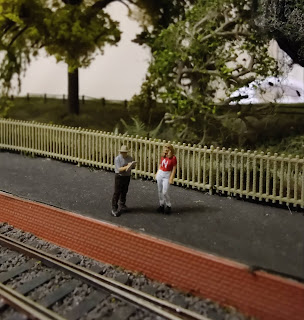 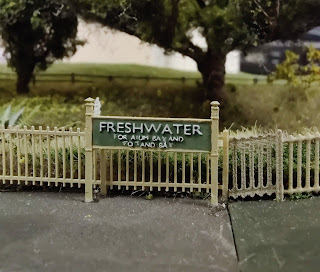 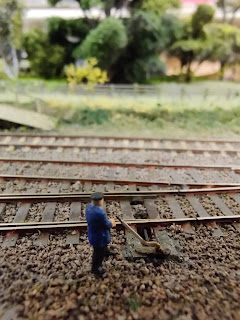 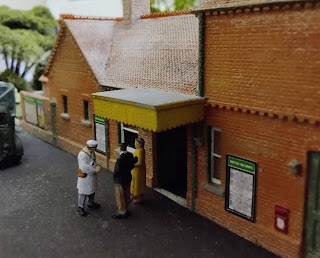 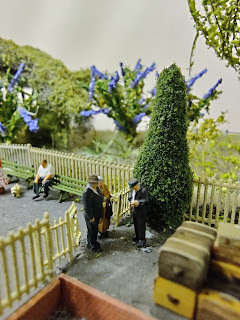 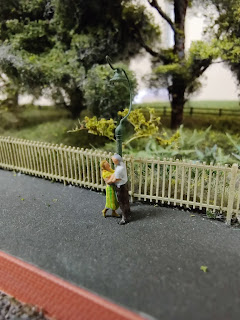 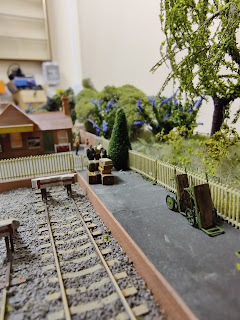