It's all in the detail

No major projects to report on for this entry, but lots of little jobs here and there that are moving the layout forward slowly towards completion (if that is ever possible).

First off, lots of telegraph poles and power poles. Seven telegraph poles where only two pairs are identical. Based on Ratio items, chopped about to provide the correct number of arms and 'pots', plus some 0.2mm diameter wire for two 'stays' where the wire course changes direction to cross the tracks.It took a lot of pouring over fuzzy photos to triangulate the positions of the poles, and identify the number of arms and 'pots' on each. 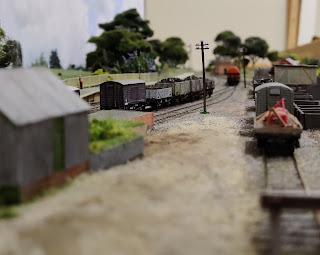 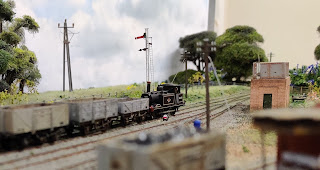 This last photo also shows a power line pole. The power lines disappear off in the direction of Yarmouth. This pole is made from 2mm diameter brass rod, with brass angle and wire additions and some 3D printed insulators I found on Shapeways.

The main power pole on the front of the layout includes a 3D printed transformer from N Brass Models. 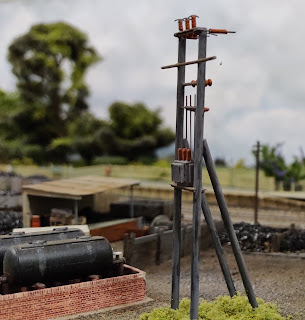 Next is a rail built buffer stop for the end loading bay, based on drawings and photos in the newest edition of 'Southern Nouveau'. 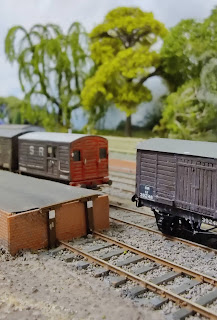 Finally, building the many coal staithes along the front of the layout has started. There appear to have been three distinct areas, with separate entrances from the road, but I only know of two coal merchants operating there.

The staithes are built up from plasticard and cut up matches, with real coal on top of black foam formers. The coal scales are lovely 3D prints from Modellbahn Union. Figures from Hardies Hobies with etched shovels attached, as they would not print at this scale. 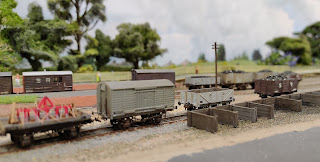 You may notice that the rolling stock is all now the types of wagons that actually appeared on the island. Largely ex-LBSCR 5 plank wagons, ex-LSWR 7 plank wagons and ex-LBSCR 8 ton vans. There is also an ex-LBSCR Road Van, ex-LBSCR Road Truck and a Royal Daylight paraffin tanker. Still more to be built though.