After some consideration, I decided to change my mind about moving the road. Instead, I added a couple of pieces of wood below the baseboard ends to reinforce the cutouts for the river bed, and added the second cutout on the front edge. I also added four small squares of wood to make locating the trestles better defined. Both these additions can be seen in the following photo: 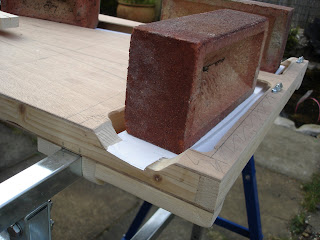 The photo also shows a brick holding down the river bed while the glue dries. Three layers of 5mm foam board were used to form the river bed, and the stream bed that runs along behind the platform. The ends of the river that pass over the board edges had the foam and the lower face removed, and will be glued to the woodwork separately (hopefully leaving the river surface smooth). The banks will be formed from more foam board later. 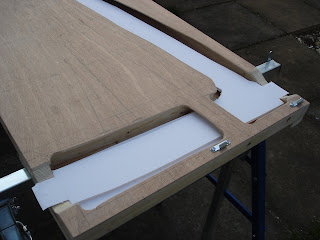