More slow progress this week, and a sense of achievement. To put this into perspective, I have to admit that in the 25 years that I have been a member of the 2mm Scale Association, I have attempted to build a number of chassis for a variety of locomotives, using several different techniques, none of which were completed. I had at least 5 tries at making a chassis for an S15, using phosphor bronze strip for frames, as was recommended in those days. I just could not drill and ream holes without them drifting away from where they should be, resulting in gears that just would not mesh. A similar chassis for an E4 had similar problems. Switching to etched nickel-silver chassis should have improved things, but a 3F Jinty and an 09 diesel shunter build both stalled with gear meshing problems from what appeared to be eccentric gears. The Terrier chassis build has benefitted from using turned axle muffs, which appear to result in gears that run true and concentric with the axle.

At the end of the previous episode, I had the worm gear on its idler axle, with an intermediate gear meshing perfectly with the final gear on the rear axle. This week, I added the crank pins to the wheels, fixed with a touch of solder on the rear. I reamed out the axle holes and muffs for a good fit for the wheels. I folded up and soldered the con-rods, and reamed out the holes for a good fit on the crank pins, and put them together and quartered the wheels, mostly by trial and error. After assembling, dismantling, gentle reaming, and assembling again countless times, I eventually produced a free running chassis, with almost no slop, and no wobble anywhere. Indeed, it is so free running, it can be pushed gently on a rubber cutting mat and the wheels turn under its own, featherlight weight. This is a first for me. 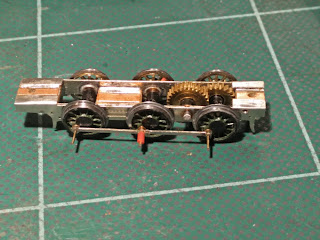 A video of it running on a 'push test'.

For the next episode, I will probably mess it all up as I add 'Simpson pickup springs' and paint the chassis, ready for mounting a motor.

It's probably worth emphasizing to everyone you must use the turned muffs on axles that have gears on them. The moulded one are just not guaranteed to be concentric - that's why they are so much cheaper. I'd be very surprised if it was found to be the gears themselves that are at fault.