OK, I know they did not survive into the 1950's but a 4 car set was used on the Freshwater line, so that is good enough for me. The brass etch for the bodies is available from Etched Pixels. They suggest putting them on chopped up peco wagon chassis, but I thought they would look nicer on etched chassis. The GWR 4 wheeler chassis from David Eveleigh is almost perfect for length. I could not figure out how to fit the footsteps provided, and the Stroudley set only had a single footstep, except below the guard's doors, so I have decided to try to etch some new solebars, with queen post and trussing and some bolt head details, and new footsteps with brackets to add on. I am also adding some buffer beams, although I might 3D print them complete with the short buffers needed. I was working on drawing a set of etched window frames for the signal box and magazine stand, and have only used a very small area of the smallest standard panel that can be etched. Progress on the etch drawing has been pretty slow as I try to learn how to do what I want in DraftSight.

Meanwhile, here is construction progress so far. The carriages were drilled for hand rails and door handles before folding up. 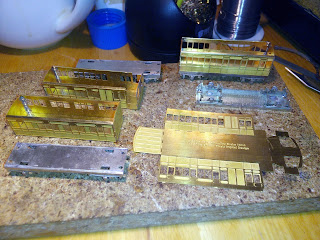