Two sets of 30 year old ex-LBSCR 4 car 4 wheeled carriages arrived on the Isle of Wight in 1924. They were followed later by some slightly newer Billington carriages, some of which still run on the Isle of Wight Steam Railway. The Stroudley sets saw less than 10 years service on the island, so are not really suitable for the period of my layout. But a set of etched brass bodies are available from Etched Pixels, so how could I resist.

Being only body kits, I needed some chassis that were more suitable than chopped up N gauge Peco offerings. After a chat with David Eveleigh it seemed his etched nickel silver 4 wheel chassis for GWR carriages would be the most suitable. I would need some suitable overlays for the solebars to give the Stroudley appearance, and some buffer beams. So started my first and only attempt at designing my own etches. I needed to etch some window frames for the signal box and magazine stand for Freshwater, so a design was drawn up, and luckily, produced a sheet that was fit for purpose, albeit with plenty of spares - just in case.

Construction started in early 2018. 0.3mm holes were drilled for the handrails and doorknobs while the etches were still flat. A pillar mini-drill was used for this. The bodies were then folded up and the corners held with a fillet of solder. The guard's lookouts were a little more fiddly, but achievable. The etches also went together well, and with my solebars added started to look the part. 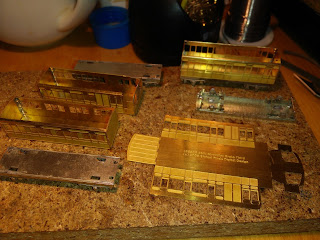 Handrails were bent up from fine hard brass wire and soldered in the pre-drilled holes. Ultima door handles were also fitted. 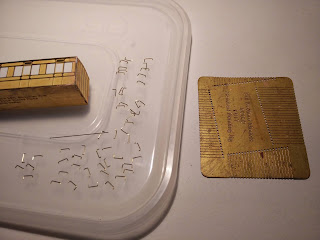 Buffer beams with buffers and battery boxes were designed in Blender and printed by Shapeways. The ends have quite large buffers, while the intermediate ones within the set are quite small for close coupling. The components were primed with rattle-can sprays ready for final spray in Southern olive green. 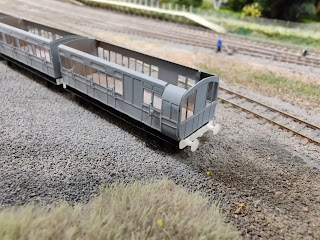 Next came the transfers. The correct numbers were formed from individual digits, and were both ends as well as both sides. With all the repeated digits in the actual coach numbers, I needed two sets of transfers from Fox to complete. It took several evenings as I could only concentrate for so long, maybe two coach sides at a sitting. 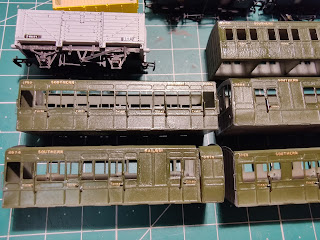 Some glazing and interior detail was next on the list of jobs. I used UV cure glue to fix the glazing. I found images of the old Peco/Kitmaster card coach interiors on the Internet, so I adjust the size and printed off a couple of sheets, and chopped them up to fit. A few seated figure from China (eBay) were added. 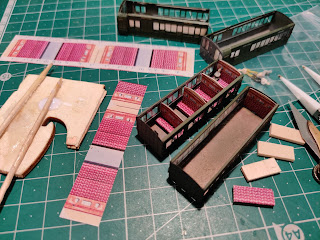 The bodies were glued to the chassis, and the roofs (with Ultima vents fitted) were glued on top and they were ready to roll.