More hacking at the baseboard

After last weekend's work on resizing the door, and making a cut-out area underneath the layout for the point mechanisms, etc, to go, this weekend's activity was a little less to do. The glue having set, all the edges were sanded down. Two cross members were screwed and glued across the underside. These will be used to locate the board on the leg trestles, but were also intended to strengthen the layout before the cut-outs for the stream and river Yar were made in the layout's top surface: 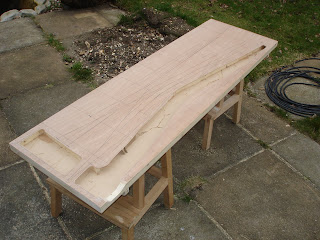 The rounded ends of the new cross members can be seen below the layout, about 4 inches in from each end. They also mean that the layout does not lie flat on the floor when off its legs, and can be picked up more easily.

The 6 inch grid has been drawn on the topside of the layout, and the trackplan sketched out on it. The locations of the strengthening timbers around the underside cutout have also be marked, to help me avoid them. The areas for the stream and river were then cut out with the jig saw and the cardboard lattice removed. The level of the river bed will not be the full depth of the door thickness. It will be as deep as the cutout in the edge timber. 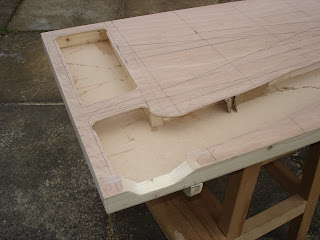 I shied away from making a similar cutout in the timber at what will be the front of the layout. I decided, instead, to move the road bridge downstream a little so it covers the timber. I may change my mind again later, once I have completed the fiddle yard connection. Now, I can just await delivery of the leg trestles, and brass baseboard joining dowels. I intend to complete all the woodwork construction, including backscenes and transportation/storage boxes before starting any track laying.
Posted by Ian Morgan at 12:57