Time to throw my hat into the ring

Since the 2mm Scale Association laid down their Golden Jubilee Layout Challenge to build a layout of 9.42 sq. ft. or less in time for their 2010 Expo, I have spent a year and a half thinking about it, and now I have a year and a bit to actually build something.

The thinking bit was quite tough, coming up with criteria to be met by the eventual design, and then getting a design that met most of those criteria. The criteria included:

Finally a suitable prototype presented itself, although it does require generous use of modeller's license. The location is the terminus at Freshwater on the Isle of Wight. Combining a scan of a large scale O.S. map onto the satellite photography of Google Earth, I found that it easily fitted on a 5 ft. by 1 ft 6 inch baseboard, with a fiddle yard of 2 ft 6 inches by 9 inches (total area 9.375 sq. ft).

The original track plan shows lots of interest, with the kick-back sidings and outside single slip. Unfortunately, the layout was rationalised between the wars, and the slip, and two sidings serving the loco facilities were removed, along with the short siding to an end loading bay. An extra spur from the run round, making 3 bufferstops by the station building was added though. For operating interest, all the track from both periods will be retained:

(the purple lattice is 6 inch squares)

To make it possible to extend the operating life of the line, and allow more variety of stock to be used, I have invented a new course of history. Following the war, it was decided to keep the Isle of Wight's rustic charm by banning all road improvements on the island, and restricting motor vehicle use to residents and local businesses. Money saved was put towards the Lymington-Yarmouth rail bridge/tunnel link. All the existing rail routes on the island were then relied upon to convey produce, supplies and holidaymakers. (Britain's version of NASA was based near Freshwater, and might have generated some traffic if it had not been abandoned).

The line from Yarmouth to Freshwater thus became a short branch, with direct trains from Newport and Cowes. Excursions from the mainland would need to reverse at Yarmouth. This new history and generous use of modeller's license means I wil call the layout "Fresherwater".

So much for the ideas, time for something practical. On a visit to the closing down sale at our local Trade Depot I found a pile of plain plywood doors for just £4 each. I felt sure I could do something with one of them, and for that price, I could just dismantle it and use the plywood. First, I would try to make use of the strength of the door's construction.

Next, I drew out the layout (mirror imaged) to what will be the underside, to determine where point motors and uncoupler magnets will go. This area was then cut out, and the cardboard lattice strengtheners removed from inside the door. More timber framing is then glued in along the edges to return the strength. The photo shows the edge timber clamped while the glue sets, and the first of the timber framing around the central hole in place. So far, the baseboard is still light, and nice and rigid. Note this will be the underside of the layout: 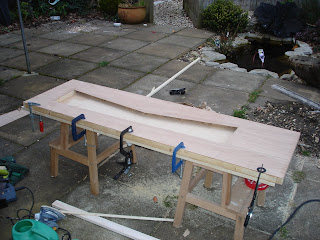 That's an interesting way to make a light but open baseboard. I guess that if you seal the MDF you shouldn't have any problems in the future.

You've certainly set yourself a task; I count nine points and a crossing/slip. Good luck I shall follow your progress with interest.

Very impressive I look forward to seeing the finished article.

And of course storage of your layout is so simply - put 2 hinges on and place in a doorway ;-)

Thanks for the nice comments. The proof of the concept will be next weekend when I make some cut-outs on the other side of the door for the stream and river bed. I'm sure that will weaken it, however, I will be adding some cross timbers to the underside to locate the legs, which will add some strength.

Everything will be well sealed with paint once the woodwork is complete, so it should remain stable.

Nine points will be a walk in the park. I built 8 for Alresford, about 20 for Bognor and 28 for Coley Park :-)