There has been a bit of a pause in progress while constructing the track required. As I only have one evening a week to allocate to modelling at the moment, it has taken longer than I would have liked. I also found a new way of slowing up progress by deciding to try filling the insulation cuts in the copper-clad sleepers with milliput (after checking the gaps were actually insulated). With a spray of primer (after washing with Cif and a finger nail brush) they really do look better for being filled.

I also built some MERG servo control boards and a tester/programmer box, as I will be using servos to operate the points and uncoupling magnets. More on these subjects will come later, I hope.

Anyway, the first length of track to be laid is across the board join to the fiddle yard. I am trying out the easytrack brass sleepers for this. Six of these sleepers were soldered in with concrete sleeper profiled copperclad, and the whole lot primed. I had to smooth out my poor carpentry by planing the surface slightly, and digging out a little to cater for the brass sleepers being fractionally thicker than the copperclad ones. The whole length was fixed down with Araldite and weighted down overnight. This morning I have sawn the rails across the gap, and sawn the brass speepers in half to restore insulation between the rails. A little more Milliput filling is required before painting the sleepers, and ballasting. 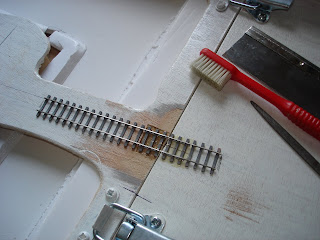 The photo also shows some foamboard being used as a basis for the river banks. The river is still tidal here, so it will have steep, deep banks.

The first point will be situated just beyond the bridge, so I now have to decide on, and build the operating mechanism, more on that next time.
Posted by Ian Morgan at 11:40

Are you the entire Basingstoke Area Group now?