Yet Another Point Tie-Bar Mechanism

I purchased an Easitrack point operator and put it together, and I was impressed by the engineering, and how nicely it operated. The problem with it was, though, that my baseboard (being a hollow door) has a very thin surface and only an inch or so overall depth. I could not see how I could fix the mechanism in place, and much of the operating mechanism would be hanging below the baseboard, where it would be easily damaged in transit.

Up to now, I have used moving tiebars (copper clad glass fibre board) operated by relays from below. Although I had found them to be simple to produce, and reasonably reliable, they are a bit disappointing to look at. For Fresherwater, I wanted to try something better. The Easitrack blade wire bending jig provides an answer to my main worry over many solutions in that the wire bends and passes below the stock rails, so the blade tips cannot rise up and get caught while track cleaning. I am still worried that if the solder joint between the wire and the point blade fails, I will not be able to repair it with the track laid, but we will see if that worry is justified.

In designing a new mechanism, I had to take my notable lack of engineering skills into consideration. The mechanism had to operate with large tolerances in almost all measurements. Where I work, tea and coffee comes in pouches which hang from plastic channel 'rails'. Consequently, large numbers of these pieces of plastic end up in the bin each day, so I took it on myself to try to recycle at least some of them.

I started by cutting a length (about 2 inches) and removed some of the side pieces at the ends. It is soft flexible plastic, easily cut with a scalpal. Then I cut two rectangular slots that small brass tubes will pass through, and move lengthwise to operate the point blades. In the photo below, the channel as it comes is on the right, and the cut up piece is on the left: 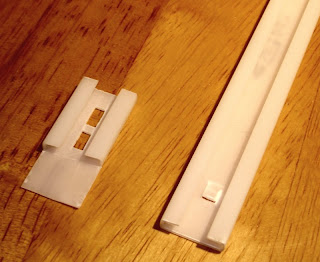 I then took the L- profile pieces I had cut from the sides and glued them with epoxy resin so that they restricted the size of the channel. These are just visible in the photo. I also glued a small micro-switch in place on a piece of paxolin board: 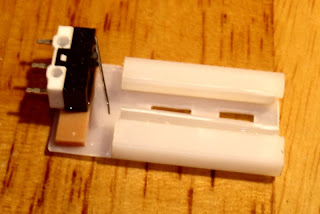 Next I cut a strip of single sided glass fibre PCB, wide enough to pass smoothly along the inside of the channel. I cut this strip into lengths of about an inch and a half, and made some insulating gaps. I drilled the end for an operating wire, and around the centre for one of the small brass tubes. I left drilling the hole for the second tube, as that is the only critical measurement, and will depend on the point it will be attached to (the way I make them): 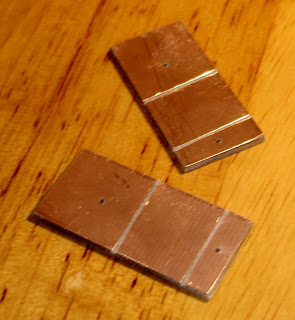 To the opposite end from the operating wire hole, I soldered a bent piece of rail with a 12BA nut on the end. The bolt through this nut will operate the microswitch, allowing some final adjustment once in place: 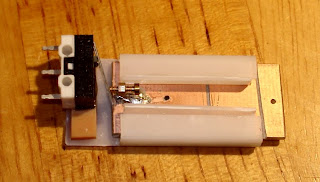 Now I needed a jig to help solder the small brass tubes in place, and here it is - a few pieces of old plywood, and a stiff wire pushed into a drilled hole. The tube sits over the wire and stands vertically while the PCB sits on the top of the ply ends, leaving the right amount of tube protruding below: 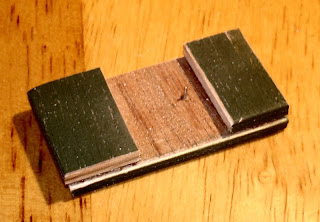 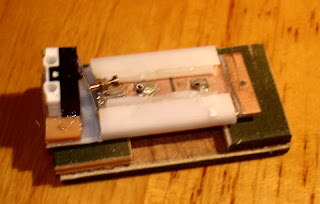 So there we are. Having created the first one, I easily made 6 more almost matching ones for the rest of the layout in one evening. How they fit, and work will be revealed in the next installment.