We had a great weekend at the Expo - lots to see and spend money on. Dave Stratton lent a hand carrying and operating, allowing me to roam a bit with the video camera.

I had the layout operating with nearly a week to go, and I chose to give the track a last minute paint job. I did not find time to add rust to the rails, just a spray of undercoat, and some paint slapped on the concrete and timber sleepers. It took an hour to scrape the rail tops and free up the point blades, but it was ready to go when the doors opened.

The layout performed a treat all the weekend, once the rails and wheels were cleaned and the back-to-back of several wagon wheels reset using the gauge. I am really glad I concentrated on getting the track right rather than pressing on with the scenery, as it is a pain to sort out with delicate buildings in the way. Now I can start laying ballast. I was definitely not going to do that before the Expo.

Uncoupling was achieved using a hand held rare-earth magnet waved about underneath the baseboards. 50 small rare earth magnets have now arrived in the post (ebay) which I will now produce a mechenism for. To shunt the kick-back siding, couplings had to be added to the other end of locomotives which previously only needed one coupling for shunting on Coley Park. It does add some interest to what is a much smaller goods yard though.

The servos and merg Servo4 control boards worked perfectly and did not require any attention all weekend - very promising.

The ability to switch from analogue DC to DCC and back again was of interest to some people, and when a wheelchair-bound friend turned up, we managed to lower the complete layout for him, using the adjustable trestles, returning it to our height later. This was not as easy as hoped, and will probably not be repeated, but it does show that we can chose what height to set up at before each exhibition.

I just have this out-of-focus pic of Dave shunting: 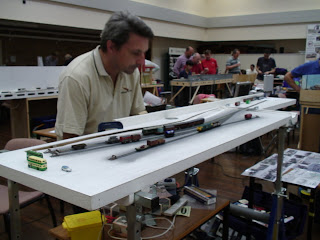