Following the Expo, I can now get on with adding the uncoupling magnets. I had always intended using permanent magnets, following their successful use on Brunswick. I bought some small magnets from Merg, but they were nowhere near powerful enough to operate the DG couplers. Now I have purchased 50 'rare earth' magnets via Ebay. These are really powerful for their size (about 5mm diameter and 3mm long) and come with all sorts of warnings. 'Rare earth' magnets have a high iron content and would corrode very quickly if not protected by a special coating. Often this is nickel plating. It is therefore not practical to cut them, and you have to protect the plating from damage.

I planned to use some more servos, as used to operate the points, to move the magnets into position under the track, or away from the tracks when uncoupling was not required. The layout has several parallel tracks at various positions where I wanted uncoupling to take place, so I planned to have a number of magnets alligned to the parallel tracks, all operated by a single servo. I cut a length of paxolin sheet, and drilled it to take the magnets, which are glued in with epoxy. Working with the magnets is interesting, as they fly around the workbench attaching themselves to tools each time you get anywhere near them. Trying to get three magnets into their holes in the paxolin to glue them without them flying to each other was also quite fun.

I made a paxolin 'arm' which bolts to one of the servo attachments, and the bar with the magnets attaches to the arm, using bolts and a paxolin block with threaded holes in it. Because of al the tracks above where the servo needed to be, I cut a sheet of hardboard to attach the servo to, which bolted under the layout away from the tracks. The photos show how it works, I hope. One shows the magnets moved well away from the tracks, and the other two show the magnets in position hard against the underside of the layout surface, below the three parallel tracks there. You can also see the Merg Servo4 board that the servo plugs into. Now I just need to build two more. 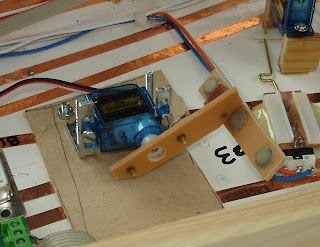 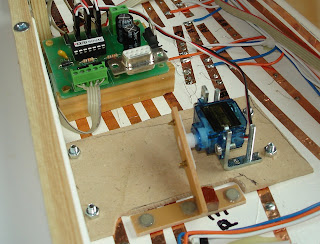 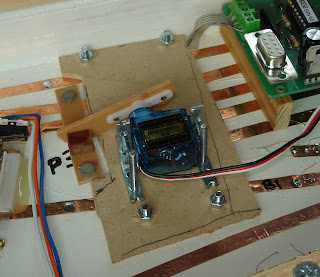