It has been some time since my last post. During that time there have been various improvements, design changes, failures, successes and experiments on the electrics underneath the layout. I have still not quite finished, but I do have a working system again.

The original plan was to use Merg Servo4 kits to drive micro servos controlling points and permanent magnet uncouplers. A temporary switch box connected to the 25-way connector on the layout operated the individual points and uncouplers. This was going to be replaced by a different box with Merg CBus kits allowing push buttons to create events which would be used to switch one or more points to set a route. However, I found that the CBus modules would not drive the Servo4 inputs directly, and problems with sharing a single AC power supply burnt out a couple of CANbus circuits.

Meanwhile, developments and new ideas were happening within Merg. I decided to replace the three Servo4 kits with two CANservo2 modules (modified CANACC8 kits). This would mean the connection to a control panel would only need 4 wires (CAN Bus and power supply). A 12V DC power supply bus was also decided upon at this point, rather than the previously recommended 5V power supply.

Another initial design decision was to wire up the layout so that it could be easily switched between analogue DC train control to DCC by swapping a 35 way connector. Either a DCC or conventional controller could be plugged in. However, the new Merg DCC command station kit was small enough and cheap enough to build it into the layout. It also produces a regulated 12V DC supply that can be used by other CBus modules, and uses the CBus connection for attaching the matching Merg hand-held controllers. The capability to switch to analogue control was retained.

At this stage, another problem came to light. The power-on surge caused by the servos was lowering the power supply voltage too much for the control circuits to recover. I decided to add a second power supply bus at 9V DC just to supply the servos, separate from the CBus power supply bus. This has mostly resolved the problem, but there is still a small problem with servos twitching and moving on powering up the layout. This problem is still being investigated.

Still to do is replace the 12V and 9V power supply sockets, as the simple sockets fitted allow the plugs to drop out too easily. I have some latching XLR connectors to replace these. I have also not yet built a control panel. I can use the hand-held controller to create CBus events to select routes, operate individual points or uncouplers, and I can also connect a laptop to the layout, via a USB to CBus interface, and operate the layout using JMRI, so the control panel can wait. I also have to build signals, and fit some more servos to control them.

The first photo shows the underside of the layout with the protective hinged covers closed. The aluminium panel has the DCC command station attached behind it so that the power transistors can be bolted to it to act as a heatsink, if required. At each end of the layout are pairs of CBus 4-way RJ22 sockets for connecting hand-held controllers, PC interface and/or control panel.

The next photo shows one end of the layout with the hinged cover open. The CBus connectors and a CANservo2 module are attached to the lid while the now redundant Servo4 modules are attached under the baseboard along with the servos. The redundant 25-way connector is also visible. Just by the hinge can be seen two servo 'distribution' boards, each with its own 5V power regulator and plugs for up to four servos to connect to. 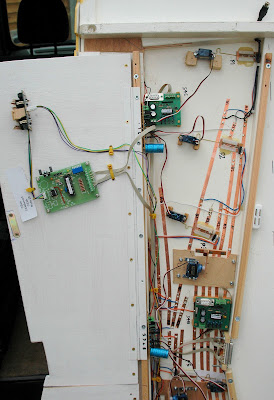 The other end of the layout shows the second CANservo2 module and the CANcmd DCC command unit attached to the cover, with another pair of CBus connectors. The DCC/Analogue switchover socket can also be seen. 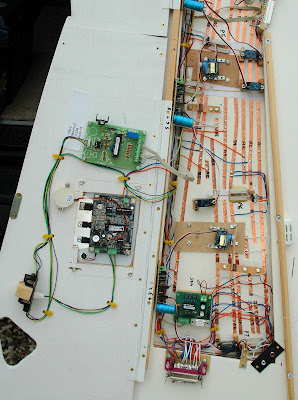