Right back where I started from

It is over 12 months since my last posting on this blog. A quick recap of the project so far is in order.

Way back in July 2010, the 2mm Scale Association celebrated its Golden Jubilee with a special Expo in Oxford. Prior to this, a layout building challenge was issued for layouts up to 9.42 square feet to be exhibited at the Expo. I built Freshwater for this challenge. As a change from my normal use of relays to operate points, I decided to try servos for the new layout. I joined Merg to get access to their Servo4 kits. After some teething problems, I managed to get the layout working just in time for the Expo with a temporary control panel with a switch for each point. Although the layout operated nicely all weekend, there had been no time to create any scenery. It was just track on white painted baseboards.

I did want to have route selection and a proper control panel, but there was a problem with the servos that I wanted to fix first. On powering up the layout, one or more servos would decide to move rapidly to one extreme or the other, despite being restricted in their movement by the point mechanisms. Sometimes they would draw so much current, the power supply voltage to the PIC controllers would not rise high enough for the PICs to start operating and get the servos under control. I had to resort to switching the power off and on a few times until things sorted themselves out.

My last posting on this blog describes the introduction of the Merg CBus layout control bus, the introduction of DCC, and a lot of work on power supplies in an effort to resolve the servo startup problems. The problems persisted and I was beginning to lose interest in the layout.

The introduction of a new Merg kit for a servo mounting started me thinking again. I had done everything I could with the electronics - maybe the problem was with how I had mounted the servos. I had them directly driving the point mechanisms which meant they were only using a small segment of their available movement. The new servo mounts are arranged so that the servo can sweep through its entire range while the rod connecting to the point mechanism only moves a few millimeters. It would no longer matter if the servo wanted to move to an extremity on powering up. It could do so quite freely.

So, a start was made removing the existing servos and their mounting blocks and fitting the new mounting kits (with 5mm shaved off their overall height to fit within the hinged cover panels). At the same time, I decided to replace the under-board point tiebars I had originally fitted. Although they had worked OK, they did not have any way to adjust the distance between the point blades. The old ones also had a microswitch to change the frog polarity, whereas the new mounting also has microswitches nicely mounted on them. My new under-board tiebars, therefore, did not require microswitches. 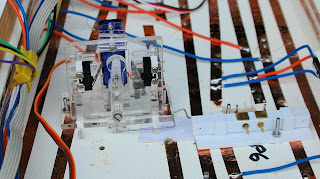 All this work has now been completed with a couple of weeks to spare before this year's 2mm Scale Association Expo in Wallingford. Unfortunately, the viewing side of the baseboard is pretty much the same as it was in 2010 - ballasted trackwork sitting on plain white baseboards. But, like the duck, calm and serene on the surface but peddling like mad underneath.
Posted by Ian Morgan at 19:40