Following general scenic work completed in time for the Basingstoke exhibition, a start has been made on some detailing and buildings. One important detail item is the starting signal. Fortunately there is only the one proper signal on the layout, as it has taken 6 months to build it. The two ground signals required will be another story.

I wanted to build a typical SR rail-built upper quadrant signal, operational of course. I purchased some etched brass signal boards, counterweights, brackets and ladders from MSE. The post would be scratch built, using bullhead rail from the 2mm Scale Association. I laid two longish lengths of rail together, and joined them with a blob of solder at each end. I could then drill through the pair for the joining bolts at the correct intervals, confident that they would line up later when the rails were parted. I found a piece of card of suitable thickness, and cut comb-like teeth into it. With some wire passed through the rail holes at each end, I could then sandwich the two rails either side of the card and solder the joining wires in each hole, with the card keeping the rails the correct distance apart. The comb slots in the card meant the resulting signal post could be slid off the card once complete.

I had some small surface mount gold-white LEDs, and decided to use one as the signal lamp. It is rectangular rather than cylindrical, but is about the right size. I formed a triangular bracket from some unused nickel-silver etch and soldered it to the signal post, and one end of the LED to the top of the bracket. This formed bothan  electrical and a mechanical joint. Some very fine enamelled copper wire was soldered to the topmost terminal of the LED and runs down the post to the lampman's platform. The platform is actually a piece of thin double sided PCB. The lower face is soldered to the post with some more nickel-silver brackets. The top face is insulated from the post, and so the other end of the enamelled copper wire is soldered to it, as is the top end of the ladder. Electrical current for the LED therefore flows up the ladder, through the enamelled copper wire to the LED, and then down the signal post.

I used an old 4mm copper clad sleeper as a base for the signal, with the post passing through a hole drilled in the sleeper, and the lower end of the ladder through two smal holes. Both were soldered to the copper, again for both mechanical and electrical connection, the gap at the centre of the sleeper keeping them electrically separated.

A piece of nickel-silver was added to the top of the post for its cap, and some small backets from the MSE etch soldered to each side of a rail for the signal arm pivot wire to pass through. An MSE counterweight and bracket were made up and attached just below where the signal arm fits. 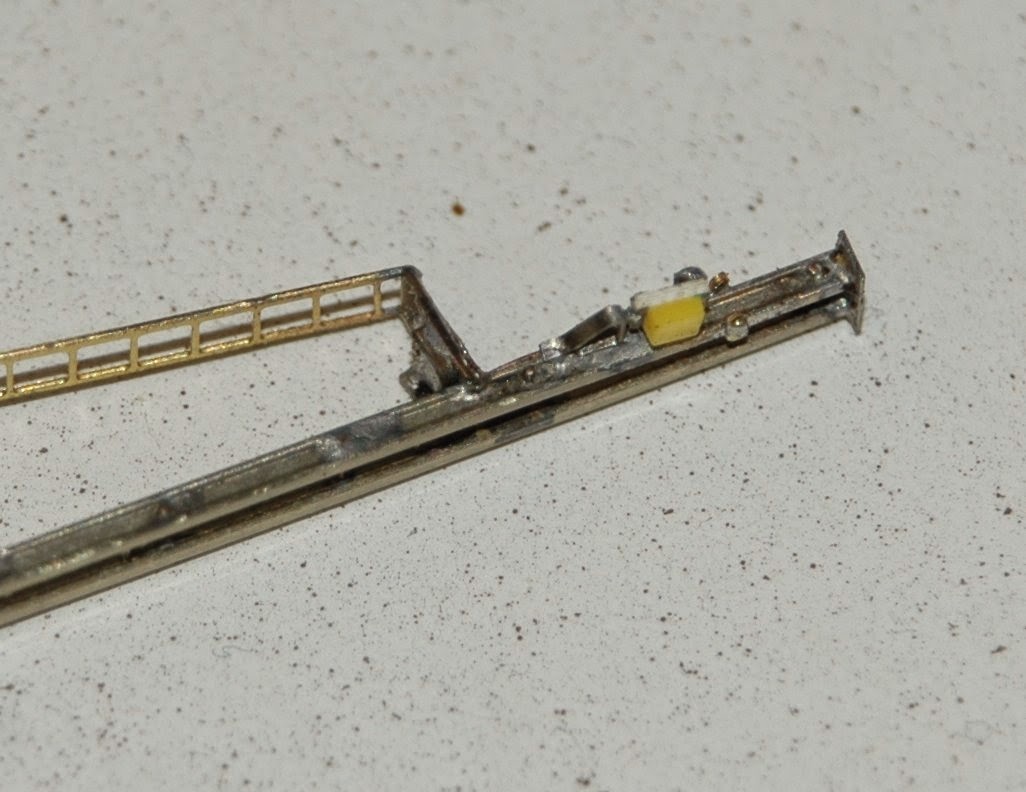 A pivot wire was soldered to a signal arm from the etch, and the arm and post were painted, sprayed with white primer, and then brush painted black and colour details. Some red and blue-green paint was mixed in some Krystal Klear PVA which was then added to form the spectacle plates in the holes in the signal arm.

The final bit of above ground work was to add the operating wires. This is a very fiddly job, requiring good right-angle bends in the wire and a lot of luck.

Below ground, I created a lever arm from some more PCB, pivoting on a wire pin through the two rails. The lower end of the operating wire passes through a small hole in the PCB. A couple more pins were soldered into holes drilled in the PCB to act as mechanical end stops, so the signal operating wire cannot be pulled or pushed further than required and thus causing damage.

The signal was then carefully glued into a hole in the baseboard, with the base covered with ballast and ground cover. I will probably regret not making it removeable when cleaning the track, but I have not found an unobtrusive detachable mounting method yet. 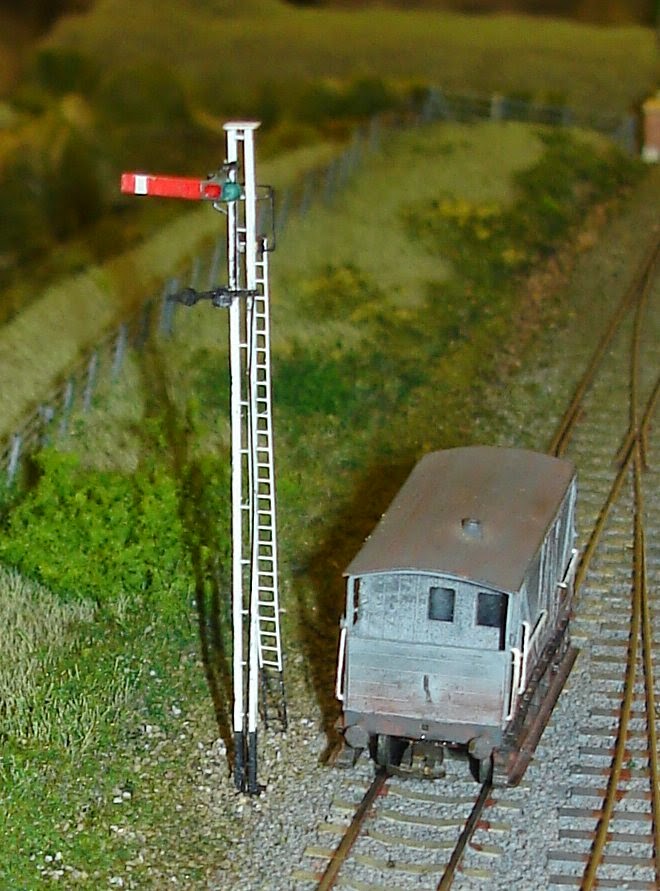 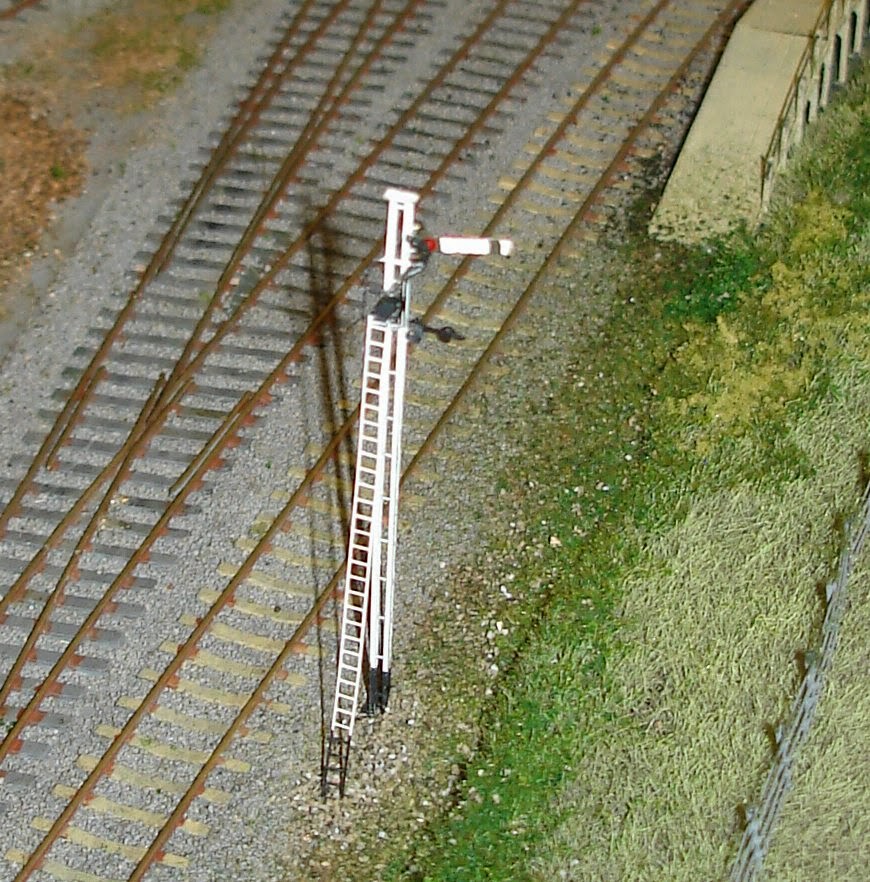 The final piece of the puzzle was the operating servo. One of the new design, 3D printed, Merg servo mounts was used, with the operating wire bent into a curious form to reach the lever arm below the signal. In the end, the operating movement was not as great as expected, and I could have got away with a smaller lever, but it works. 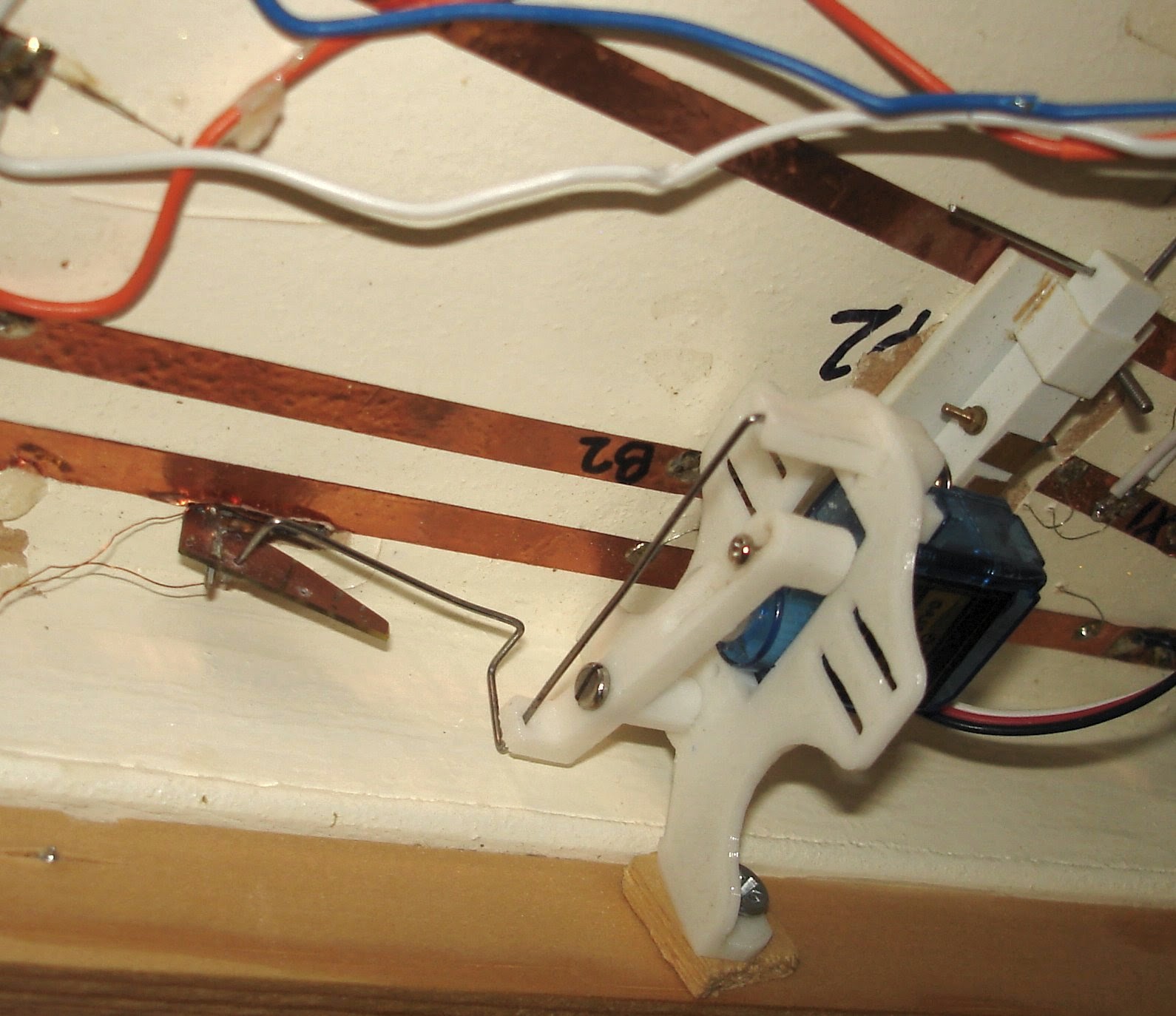 It is now configured into the Merg CBus system so that a single CBus event will raise the signal arm. This can be generated from a Merg CANCAB controller, or a simple push button on the control box I made to give simpler operation of the uncoupling magnets.

Any of the route setting events will lower the signal arm, so it should not be possible to forget returning the signal to danger before the next movement takes place.