A Terrier for Freshwater

As anyone who has seen my layout at exhibitions can tell you, so far some very unlikely motive power has been operating the Freshwater line of the Isle of Wight. I do intend to rectify this, but getting the layout operating smoothly, and scenery added were higher priority. I have acquired some Dapol A1X Terriers (one at least with the correct extended bunker) ready to be converted to 2mm finescale. Many months ago I started work on modifying the original chassis, as per an article in the 2mm Scale Association magazine. I even 3D printed some replacement gears incorporating axle muffs, to replace one of the originals that I ruined while reaming the centre hole. The hole had drifted off-centre. Just a couple of weeks ago, I had the chassis running, although its starting speed was about 40mph. I even got as far as connecting a small DCC decoder, and this actually improved it, with much better starting and stopping. However, electrical pickup was still a bit hit and miss.

So, for my first evening working on the chassis, I started by folding up and soldering the chassis building jig. With luck it will survive long enough to be used for the second chassis.

Then I started on the chassis frames. Unfortunately, the reinforcers are not arranged on the etch as a 'fold and align' arrangement like the coupling rods and bosses are, but need to be cut out separately before attaching to the main frames. Where the idler gear axle bush cutout is on the frame reinforcer, it dissects the top edge leaving a very thin piece of metal keeping the two ends of the reinforcer together, so must be handled with care. It might be possible to use some fine rod in the brake gear holes to align the reinforcer and the frame when soldering them together, but the rod would probably get soldered into the holes at the same time. I therefore aligned them by eye. Alignment needs to be accurate, or the frame bushes will not locate properly into the frames.after sweating them together, I inserted the frame bushes into their holes and soldered them in. The holes needed to be reamed a little to get them to fit. This requires a slightly larger reamer than found in the usual, cheap reamer sets.

The PCB tabs were then folded at right angles. The tabs with holes in, I folded along the wrong fold lines, so I will have to rectify this later. The frames were then fitted into the jig, and axle rod inserted, as shown. This completed the evening's work. Next time, the PCB spacers need to be added, then I can try it with wheels and gears, and add the coupling rods. Then I have to ponder fitting the motor and worm. 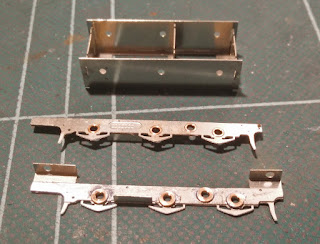 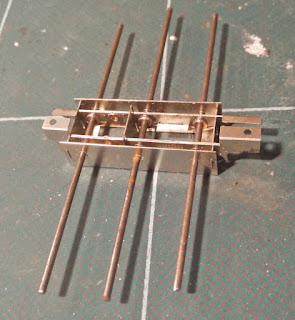 So, now I learn that what seems obvious to me as the designed needed putting in the instructions.

You put the bearings in the frames first. Then the strengthening piece self-locates over them. The other way around is a nightmare.

The strengthening piece is a bit delicate on this loco. This comes from the size of the thing and could only be avoided if we get bearings with a smaller lip on them.

Thanks Chris, I will do this on my second chassis.