Fiddling with the Fiddle Yard

Not much progress to report on my Freshwater layout itself, as various projects have stalled for one reason or another. However, with some exhibition bookings a couple of months away, I had to make some progress somewhere. I turned to the fiddle yard.

Originally, in the rush to complete the layout for the 2mm Scale Association Golden Jubilee Challenge, I just roughly laid a few 60 foot track panels on double sided sticky tape across the fiddle yard and joined them up electrically. This single line has sufficed so far, but it did mean a passenger train had to be taken off or put back on again when required.

Five years later, and the sticky tape is not as sticky as it once was. Track panels started coming loose. I decided to take the opportunity to add a point while I was relaying the track. This would pretty much double the capacity of the fiddle yard, although slightly reducing the train length. So I built my very first EasiTrac point, with a 1:6 crossing so it would be as short as practical. The point, and track panels, were glued down with EasiTrac glue this time.

I laid the plain track straight, at the diverging angle from the crossing, for several reasons:

I decided on a low-tech approach to point operation, similar to that used on my previous layout 'Brunswick', in complete contrast with the Merg CBus controlled servos and under-baseboard tie-bars used on the layout itself.

A piece of glass fibre PCB is used as a tie-bar, and an electrical toggle switch, mounted on a bracket from the DIY superstore, provides both the mechanical movement and the electrical switching of the frog. The switch is connected to the tie-bar with some Plastruct pieces (the outer tube section being glued to the baseboard with a smaller rod section free to move back and forth inside) and some pieces of wire guitar string. 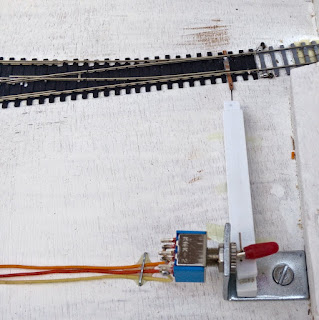