Still making progress, and still making mistakes. The etched chassis does not include any provision for mounting the motor, but I spoke with Jerry Clifford at the Didcot exhibition who said he fits a piece of plastic onto the centre frame spacer, files a curved saddle into it and glues the motor to that.

I always want to be a bit different, so I thought a blob of Milliput might form a saddle without the need for filing. My first attempt started well, but as the Milliput took a long time to harden, the weight of the motor, and possibly the attraction of the magnet to the steel tyres, meant the motor ended up not quite parallel to the chassis, and the worm sat right down on the worm gear too tightly meshed. I pulled it all apart and tried again. This time I added a piece of thin paper onto the worm gear, forcing it down into the teeth with a fingernail, so that the worm should end up at the correct meshing distance.

I took some video of the chassis in action before the Milliput had set on the first attempt, which looks encouraging:


And a photo of the second attempt with the paper spacer on the worm gear: 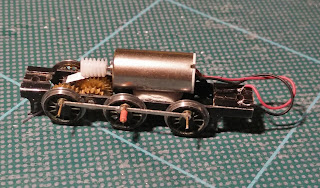 Preparations for adding the Dapol footplate and body are underway. Two pieces of the footplate have been removed to make room for the motor, but still leaving the fixing holes for the lugs on the body. I had to remove the smokebox door (which is a push-in to the boiler end) in order to push out the weight. The slot in the weight is not big enough to take to new worm and will have to be enlarged. Once that is done, the body should fit without further fettling. Indeed, there should be room in the side tanks to fit extra weights. I have not decided where to put the DCC chip yet.

Still to do is fit crankpin washers and see if everything will fit between the steps of the footplate. Then there is the brake gear to put together. 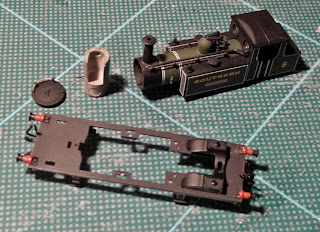 I am working on some 3D printed motor mounts which I hope will work well with the various chassis designs.