Since the retirement of '70K Coley Park', and the moving away of most of the group members, the Basingstoke Area Group has languished for a while. However, we now have a couple of new members, and a start has been made on a new group layout, designed by Peter, called 'Camford Junction'*. The initial phase of the layout will comprise a double track main line with a double track secondary line diverging from it, both being at a higher level towards the back of the layout. In the foreground, at the lower level will be a Traction Maintenance Depot (TMD) and a DMU stabling yard. The layout will be set in the last days of British Rail, just before privatisation.

Following a couple of tutorial evenings, the new members, Clive and Robin, have been busy building 1:6 Easitrac points for use in the TMD and yard. The main lines will use flat-bottom rail, so the 1:8 crossover points have been built by me (Ian) using copper-clad sleepers.

The first crossover and some lengths of the secondary line tracks have now been laid. Note the use of some old, and heavy, flourescent light ballast units that are used to hold the track down while the Easitrac glue sets. Also, some paper is used beneath the copper-clad sleepers to bring the rails to the same height as the plain Easitrac sleepers. 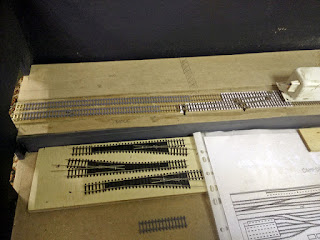 * The name Camford is an alternative portmanteau to Oxbridge.
Posted by Ian Morgan at 12:06