With only two weeks until the Newbury exhibition, taking a chisel to the layout might seem a bit foolhardy. However, I had a few jobs I wanted to complete before showing the layout again, so I have booked a few days holiday to get them done.

The first job is to extend the station concourse. Having acquired more photos and information, it was apparent that I had underestimated its size, as the W.H.Smiths bookshop and newsagents was sited between the station building and the signal box. I have moved the buffer stops almost two inches closer to Newport. I positioned some plastic card and foamboard as foundations for the buildings and concourse surface. The headshunt is still long enough for a Class 33 to run round. The prototype was only just long enough for an O2 to run round, but that would be a bit restrictive for my layout. The ground surface can now be remade.

A little more destruction along the rear of the platform was caused by the removal of the over-height etched fencing which will be replaced by 3D printed Southern Railway cast concrete palings that I have created. 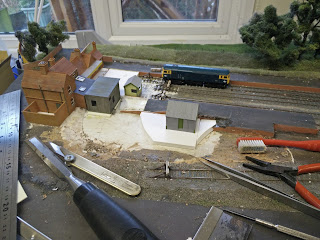 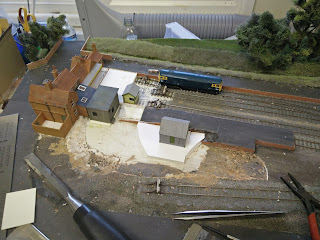