Some more buildings for Freshwater

Not much has been happening on Freshwater for a few months as all my modelling time seems to have been spent making up Merg electronic modules for other peoples' layouts. But this is about to change as I have an invite to the exhibition in Newbury on February 11th. I had set myself a deadline to get the station building and surrounding area sorted, and some more trees planted before this. So, over the Christmas period, I spent some time on the laptop fiddling with Blender to get the signal box and W. H. Smiths bookshop ready for 3D printing. I had also received an old photo showing the side view of the corrugated iron goods shed. My previous 3D printed model of this had been made using just a distant, end view, and I had imagined double doors would have been fitted on the sides. This new photo showed just a single door, and a brick built plinth. I therefore editted my Blender file, and got a new 3D print. The images below show the 3D prints, as received from Shapeways, having just cleaned them with acetone-free nail polish remover, and given them a light spray with Tamiya fine grey primer. I hope my painting skills will be up to the task of finishing these off. I have to find some suitable window frame etches to modify to fit, as nothing off-the-shelf was appropriate. 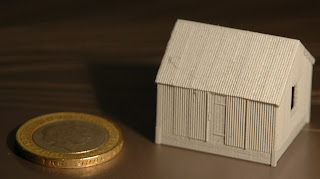 and the newly acquired photo of the original 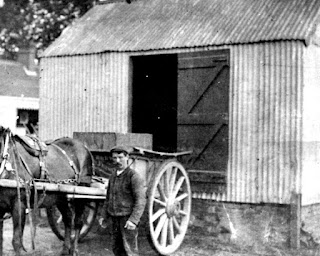 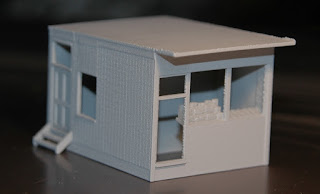 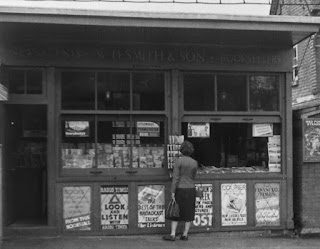 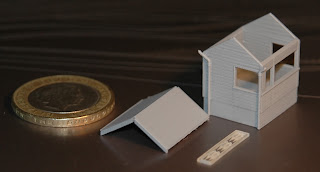 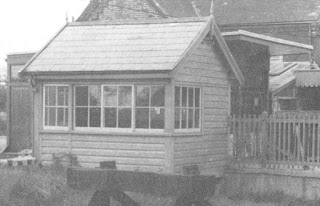 The station concourse is larger than I imagines, so I will have to move the buffer stops and rebuild the concourse/platform a little to fit the bookstall where it belongs. I have also 3D printed some SR standard concrete paling fencing to finish off this area, as the etched brass fencing I fitted originally is much too tall.

My first attempt at the iron shed included the pointy finials, similar to those on the signal box, but they broke off in transit. I, therefore, re-created them as a separate set of 6 (with a sprue) printed in FXD which will be added to the shed and signal box later.