A major milestone has been achieved , with trains running on part of the layout for the first time. I have been putting together a collection of cheap, ready made electronic modules with an Arduino to produce a quintuple analogue DC controller that is operated via commands sent through the Merg CBus. It can be operated using Merg hand-held controllers (CANCABs), or via a PC running JMRI and smart phone throttles. It is still a bit experimental at the moment, but is developing into a usable system. 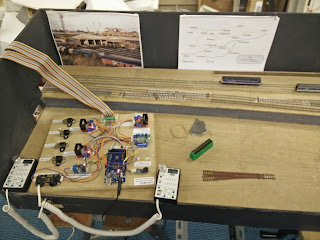 The one baseboard of Camford Junction is fully wired up for the 4 main lines, and this was used for tonight's test. Unfortunately, only N gauge locomotives were available, and their wheels and flanges do not pass through the finescale pointwork, limiting how far two of the tracks could be tested. I also only have two CANCABs and did not have time to set up the PC and WiFi network, so we could only run two trains at a time. However, the test was reasonably successful, as can be seen in the video:

So, now I need to get on with the wiring of the second baseboard, while the others lay some track for the TMD on the first board, in an effort to have trains running to and fro in time for a display at the Basingstoke model railway exhibition in March.