And then there were two - 1

For exhibiting 'Camford Junction' at our show in Basingstoke back in March, I had cobbled together various modules purchased on eBay, controlled by an Arduino, all screwed to a piece of wood and joined up with a bird's nest of wires. This provided the five analogue DC controllers to drive the trains on the layout. By pretending to be a Merg DCC Control Station (CANCMD) it allowed Merg hand-held throttles (CANCAB) to be used to control the trains. It also meant that JMRI, running on a laptop, could also provide on-screen throttles, and by hooking up a WiFi access point, Android and iPhone throttle apps could also be used to drive the analogue DC trains.

Having performed faultlessly all weekend, I had to tidy it all up, and put it into a proper case for protection. This has taken longer than the original build.

I have also been thinking about the problem of failures and rectification of faults during an exhibition. With a club layout, there will always be some concerns amongst the membership about the reliability of new technology. For Camford Junction, I have tried to make fault rectification as simple as possible, by standardising and separating things. The layout is powered by several identical laptop-style 12VDC power adapters. We will have a spare one that can be used to replace any one of these in the event of a failure. So far, I have used only two types of Merg CBus modules, the CANSERVO8 module to control up to 8 point servos, and the CANACC8 module (modified for 12V DC power) to operate a standard 8-relay module widely available from eBay, to switch track sections between controllers. We will carry a spare for each module, which can be quickly swapped if required. It will be necessary to plug in the laptop to load the configuration data into the new module for its new location.

The new control box is a different matter. If one of the other layout modules fails, it will disable a few points or a few track sections, but if the control box fails, the whole layout will grind to a halt. Repairs under exhibition conditions would also take some time. The simple answer was to build an identical spare. Fortunately, the total cost of all the modules in the case is reasonably low, but it did require a lot of drilling holes, crimping, and soldering. The end result, twins: 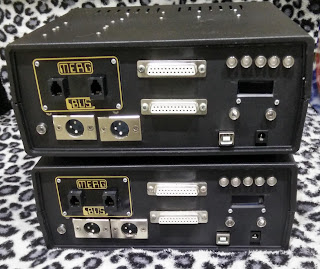 The next step will be to add a Raspberry Pi (a very small Linux computer) into the control box that will run JMRI and provide WiFi access, instead of having to plug in a laptop.
Posted by Ian Morgan at 17:01