What goes on below Camford Junction

Now that the elevated main line tracks have been laid, I wanted to make a start with the hardware and wiring below the baseboards before track laying in the lower  depot area started. Firstly, individual dropper wires were soldered to each separate length of rail, and pushed down through holes drilled in the baseboard. The dropper wires are single strands from a multi-strand cable. Each one is like a piece of fuse wire, but being just a couple of inches long has been found completely reliable on a number of 2mm scale layouts we have built.

Below the baseboards, the dropper wires are joined to solder tags screwed to the woodwork. These will later be linked by proper, multi-strand hookup wire. 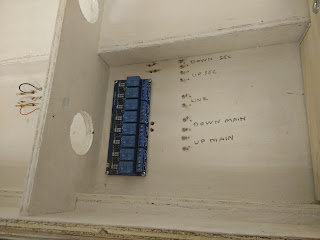 The photo also shows a cheap relay module found on eBay. These relays will be used to connect the four analogue controllers to the various track sections, dependent on the selected routes.

The points will be operated by cheap RC servos. These are mounted in aluminium 'Dingo' servo mounts, which allow the servo to travel fully while only moving the actuating wire a few millimeters. This is important for slow and quietly smooth movement of the point blades. The mounts also include micro-switches that can be used to switch the frog polarity and give position feedback to a control panel.

The under baseboard tie-bars I designed for this layout are 3D printed, and are now available from the 2mm Scale Association shop. 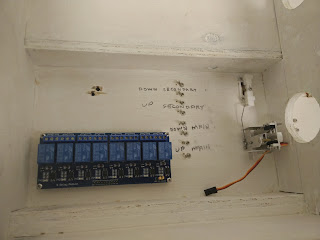 The layout will use the Merg CBus layout control bus (LCB) which is designed to reduce the amount of long runs of multiple wires, requiring only 4 wires between a control panel and the layout. Various actions, such as pressing a button, or a train being detected in a section, will cause numbered 'event' messages to be broadcast across the bus. Other modules will be taught to act on specific events, switching relays, moving servos, lighting LEDs, or whatever. There will still be a lot of wiring, but most will be short runs, contained within a single baseboard. The bus concept is also more flexible than conventional wiring, as modules can be taught to act on new events, or perform different actions for existing events, as the layout evolves. This photo shows a CANACC8 module (which produces 8 steady-state outputs) that will control the two relay modules. I still have to attach a CANSERVO8 module, that can operate up to 8 servos, but this will also operate some of the depot points, so I need to determine the best location for it to minimise the wire lengths required to the servos. Servos can jitter if they pick up electrical noise in their wires, especially with analogue locomotive control. Surprisingly, DCC locomotive control is not such a problem. 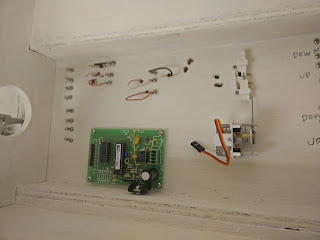 To assist with setting up and positioning the point tie-bars and servo mounts, this little servo tester I found on eBay has proved very useful. It can move the servo to its centre position at the push of a button, or you can use the knob to manually move the servo, or it can work automatically in 'windscreen wiper' mode. So, next week, I can start adding some wires.